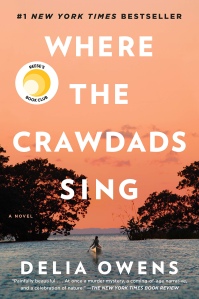 It’s rare that I read a current book while it’s still popular. If it’s at the library, then there’s a long waiting list and by the time I receive it, the majority of the population has already read it and no longer need to read it. If it’s not at the library, then it takes forever for them to buy a copy and by the time it gets there, then again, most people have discussed it and moved on.

This time, however, I was able to buy a copy of the book. Barnes and Noble was doing half off of popular bestsellers and because Where the Crawdads Sing was one of the selections half off, I couldn’t resist purchasing a copy.

I was pleasantly surprised by Owens’ poignant characters.

Kya Clark is growing up in the marshes of North Carolina in the 1960’s, poverty stricken and suffering at the abuse of her drunken father, a man disabled from the last Great War. One by one, her family members leave without a single word; her mother, then her sisters, and finally her brother Jodie. Forced to take care of herself, Kya takes to the marshes to catch fish and dig up mussels to sell to Jumpin’, an elderly black man who treats her as one of his own. Eventually, even her own father abandons her and Kya’s legendary name of The Marsh Girl begins to grow.

It is a story of love, loneliness, and resilience in the face of abandonment and even murder. Several times, I wonder if Kya would ever abandon her place, just as her family had done, but she continues to survive against all odds.

It’s probably not quite the same, but in some spots, I am reminded of To Kill a Mockingbird by Harper Lee. Kya knows that the village views her as white trash, someone as bad as that colored folk in town and when she is accused of murder, she tells Jumpin’ that if she told the truth of how Chase Andrews really was, she would be laughed off and worse, just like him.

I found the book to be poignant and hard to put down. I give Where the Crawdads Sing 5 stars.