Going on adventures can make everyone happy.

This pedestrian bridge was something my husband helped plan out before they built it. In our original wedding plans, we were going to have some reception/more wedding photos taken here, then eat at the restaurant across the street overlooking the bridge.

Unfortunately, the virus changed our plans so we never got to have pictures here or eat at the restaurant. I’m glad our wedding worked out the way it did, but sometimes you wonder about what might have been.

If what was on the summit something more than you ever wanted, would you climb it? 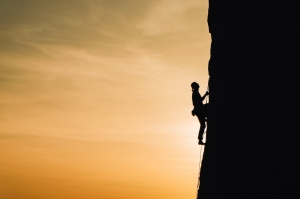 This week has been busy for me and I haven’t been at my iPad to sit down and write. I could have done some writing on my phone, I suppose, but the screen is small and trying to type up a blog post is not that great, you know?

I went to see a small indie film on Thursday, called Pretty Strong. It was created by a indie film group Never Not Collective, sponsored by the REI store. Running supplies, even. I’ve only been a couple times, but it’s a neat place to walk through.

Anyway, this documentary focuses on several different female rock climbers as they accomplish difficult ascents around the world. Some of them like to boulder, others do full scale rope climbing. It was pretty neat. Some of them accomplished routes that hadn’t been done by women before (but by men, of course.) As the documentary suggested, they were pretty strong women.

I only started climbing myself in the last year. I began climbing because I wanted to spend more time with my fiancé. I’m not that good at it, as I don’t go all the time like I should be doing, but I find that I enjoy the process of it and especially when I’m able to get to the top of the route. It’s fun and I hope to do more of it in the future.

It’s just sad to think that even ten years ago, not many women were rock climbing. It was a hobby exclusively for men. I’m glad to know that it’s finding more popularity with women. I just need to work out more and get more in tune with my rock climbing. It’s frustrating sometimes when you can only get a few feet off the ground. I’m told that I’m doing better than I was when I first started out, but it definitely doesn’t feel like it.

Anyway, I hope Pretty Strong comes out on DVD, because I’d like to watch it again. Sitting down in a comfy seat this time, rather than standing up.

There is snow on the ground this morning.

I woke up early due to a headache and when I slid out of bed to get medicine for it, the outside glowed a white orange. Confused, I looked out and saw a sea of white.

I almost forgot what it looked like, the cold, white flurries. It’s something I haven’t seen in a few months and even when it fell, it didn’t stick very well.

We used to get a lot of snow. We even got several weeks of snow days one year. Now, we barely get anything that is worth talking about.

I hope the kids enjoy the snow for a day. It might not happen again for many months.

On Saturday, I went for a short hike in the woods in Jon Bryan. There is a trail along the top ridge of the park that allows for rock climbing for those inclined. I’ve been inclined to go seek it out ever since Adam and I talked about going there to go climbing. He’d gone there on his way home a few months ago and said that it’d be doable for the two of us to do.

I parked in the right parking lot that would allow me quicker access (last time I went I was on the other side and it took me an hour to get there, much to my annoyance.) This time it only took me about 20 minutes to get to the first climbing rung and I was surprised to see how obvious it was to find it. I thought I would have to hunt for it and being on the edge would make me feel a little nervous. But I could see it quite clearly from the trail and it made me happy.

I walked a little farther and found another climbing rung. This one was quite obvious as there were actual rock climbers preparing their ropes and going down. There was even a small child with them, oh about 9 or so. If you start them young, they are strong and fearless.

I went a little further and found another one. By this time I decided I wanted to turn back around and head back. Because it was a nice day, the trail was congested with other hikers and a ton of dogs. It was hard to enjoy the scenery and hunt for the climbing rocks with so many people around. But I was so happy to know that I was on the right trail and that I wasn’t going crazy thinking I was going in the wrong direction the last time. I’m excited for the future and being able to go hiking again. I can’t wait to be able to do this with Adam.

Free Solo is a documentary that follows professional rock climber Alex Honnold. For the last few years, he has done what many climbers call “free soloing”: the art of rock climbing without the safety of a rope.

Obviously, this is a dangerous venture, even for the most experienced pursuers. But during the duration of National Geographic’s documentary, the viewer sits upon the edge of his seat with chewed nails and an uneasy mind as Honnold attempts to climb El Capitan’s rock face in Yellowstone National Park.

Free Solo won best documentary of 2018 at the Academy Awards this year and it truly lives up to the honor. I feel as if I’m there on the rock face with him, clinging for dear life as I try to find the next hand hold.

But the rock climbing is only a small slice of the documentary. We are granted a view into Honnold’s life: his intense passion for the thrills he seeks, the life he led that brought him to this, and the woman who loves him in spite of the dangers he chooses to seek. One can look at what he does as sheer insanity but to look at his life as a whole makes you appreciate him for wanting to live life more fully, on the edge.

I find it to be fitting that Solo won best documentary. One of my first dates with my boyfriend was rock climbing and we make plans to do more of it in the future. To see what a person can do with their body in order to reach the top of the mountain is purely mesmerizing. I don’t know if I’ll ever do a free solo, but it’s definitely something amazing to watch.

I’m glad this was brought to the forefront and won well deserved recognition in film making.